How Important Are Team Goals? 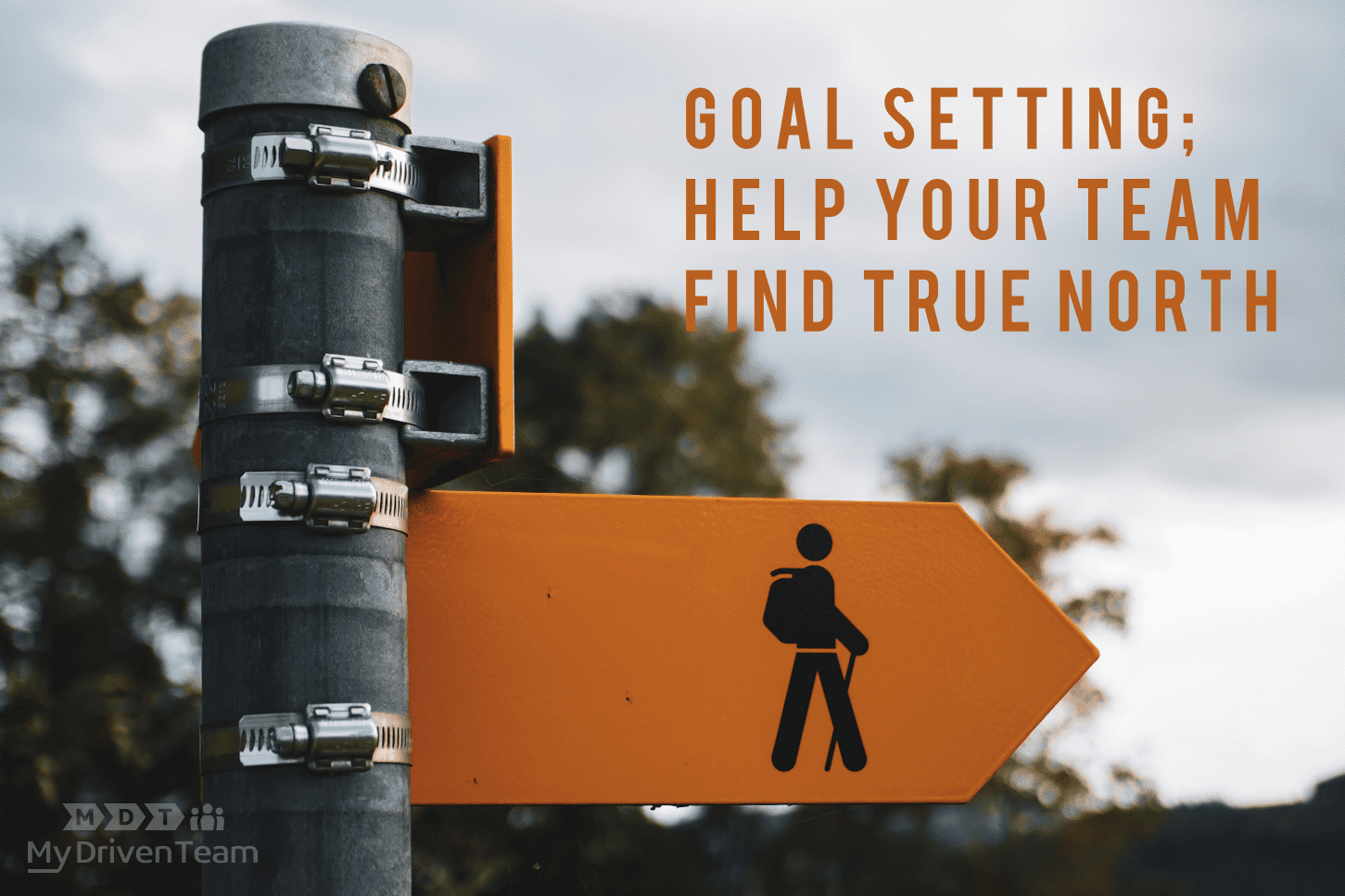 Goals are NOT critical to success! I bet you didn’t expect to read that, did you? If you think about it, people often function without explicitly said or even written goals in mind. Do Doctors and Nurses have to have a written goal to save lives, probably not. Does a Race Car Pit Crew have to have clear goals in order to change the tires during a pit stop, doubt it! All of that being said, having a clear set of goals DOES play a role in the direction of a team (or person) and ultimately their trajectory towards those goals.

So, if goals aren’t critical, but do play a role, what role do they play and how critical are they? This basically becomes an effort versus benefit exercise. Is the prize worth your effort? Here is what I would consider the minimum effective dose when it comes to goal setting:

Goal setting is inherently looking towards the future. Oftentimes teams don’t do that naturally. They get locked into their individual tasks and just get the job done. While this isn’t a bad thing, it assumes that they won’t be moving, which just isn’t true. You’ve probably heard the saying,

“In this world you’re either growing or you’re dying”.

So, setting goals helps you avoid the later. By taking the time to look ahead to where you are going, you’ve got to also take stock of where you are. This is your baseline or current state. Understanding your baseline is the first step towards putting a line in the sand and saying, “we are headed this way!

All of that said, if you don’t measure something for this, you might have trouble later. Consider applying some kind of metric to your performance. Don’t worry if the metric is “ugly” to start. This gives you plenty of room to improve as you progress. If anything showing quick progress can help you build momentum quickly (which makes the process much more fun).

2.) Setting The Stage for Improvement:

By setting clear goals, you’ve now set the stage for change and improvement. If done well people will likely rally towards this goal or goals and start to march differently. An easy example is to think of Kennedy that set the target for the U.S. to go the moon. This was an impressive example where an entire country got excited, put resources towards improving the technology, and literally willed the changed to happen.

Change isn’t typically easy. People need to be mentally prepared for change. Some will take it well and others will resist. If you are working with a team, you have to know the “key” stakeholders involved. The best thing you can do is to have these key influencers as part of the goal setting process. Collaboration like this can take time and feel painful. However, setting a goal in vacuum can drum up resistance that can be avoided.

The same goes if you are setting goals for yourself. Some will happen easily and others will fight back. If you are setting a goal for yourself, consider your own resistance and the emotions & factors that may stand in your way. Write these down so that you can create a plan to overcome. Don’t let them stop you, but don’t ignore them either.

I like to think of this process as warming up the engine on a cold morning.

Earlier we discussed the idea of setting a baseline. This baseline is now a relative point towards your new future. Think of this new future as your “True North”. Your true north doesn’t change and neither does your starting point. You are always somewhere in between. I always like to think of this as a google map route. The challenge is that you can’t just plug in your future to google maps and get an answer. You have to measure your progress to know where you are at. The more often you do this, the quicker you can make adjustments to make sure you hit your target. Just imagine if google maps only measured once an hour. How far off target could you get?

Consider a rule of thumb in aviation that I’ve heard quoted that’s known as the 1 in 60 rule. Basically, for every 1 degree a plane veers off course, it misses its target destination by 1 mile for every 60 miles. Applied to your life or a business process, the implications are enormous.

Avoid The Pitfalls of Goal Setting

So, I’ve given you the minimum effective dose above, but that was the bare minimum. As with anything, if you want to increase the likelihood of success, there are other things to consider.

You’ve probably witnessed teams that have had goals but didn’t hit them; you may have even been on one. They put all of this effort into setting a true north and nothing comes from it. That’s the worst case scenario, right? Not necessarily, since their is always learning to be had. However, that does mean that goal setting has some best practices. Let’s explore where I’ve seen this work and where I’ve seen some serious pitfalls:

When I was in a position of having many direct reports, I had pride in the fact that I “over-communicated” my intent and goals for the team. I painstakingly held meetings with the team on a weekly basis to go over the current and future state, as well as highlighting our successes and failures along the way. I’m not saying this to brag. There were team members that really responded to that. There were others that resented the fact that I would pull them away from their daily tasks to give a “speech”.

There is a balance here. Ideally, teams are reminded how their tasks link to the overall goal minute by minute. Think of a scoreboard in a football game. Team-mates can look up at any moment and see how much time they have left, what the score is, and who is winning and losing. This isn’t always the case in the professional world, but it should always be our goal. My personal suggestion would be, limit the “speeches” to quick mini updates and rely heavily on integrating specific & visible metrics to daily actions that influence behavior.

Ideally team goals and performance measuring are clearly linked. So, instead of setting goals and forgetting about them, they are obvious and easily accessible; think green or red. You are either on track or off track…celebrate when you are in the green and problem solve then you are in the red.

2.) Ensuring The Goals Have a “Tangible” Purpose

I actually started to make purpose my first bullet, but then I realized even with the best purpose, a lack of communication can kill the whole thing. However, without a clear purpose the simplest of goals can often fall short. Let me explain…

Almost every action we take has a purpose. Go to work to make money. Get up to make a cup of coffee. Make your lunch so you can eat. Wash your dishes so they don’t make you sick. However, what happens in real life is we have to prioritize. Run short on time one morning and you may decide to skip your shower. You might even skip packing your lunch or making your coffee. This happens at work too. Team members will often run short on time and have to make decisions on what is critical and what is not. So, if you’ve set a goal that requires them to do something different but they don’t link the purpose with that…they may decide it’s not valuable. So, bottom line…

Purpose = Value to the person responsible for the action

So, you may have noticed in the title, I said “tangible”. That was very purposeful in itself. Making a goal tangible can come in many forms. One of the easiest is compensation. It’s amazing what happens when you tie a goal to tangible compensation. Here are some things to consider when it comes to compensation or bonuses:

3.) Creating a Cadence of Accountability

We’ve all heard people complaining about accountability. This is such an easy scape-goat. In fact, my experience tells me that the people complaining about this are usually the worst at holding themselves accountable. A cadence is like a rhythm. Successful teams have a rhythm of holding people accountable to what they say they are going to do. This doesn’t have to be complicated, but there are a few keys things I’ve learned:

I can’t over-state how important this is. I actually believe that you can screw up a lot of these goal setting activities but if you get this one right, you can overcome these mistakes. Many people don’t create the rigor needed on this topic. This is the reason many people see success by hiring coaches. The exact coach isn’t really the magic here…it’s the cadence of accountability that is moving the needle.

Missing a goal can feel extremely defeating! However, taking a different approach to can actually help you extract value from said defeat. I’ve led many sessions where we looked at what caused the miss and built a plan to overcome next time. I like to call this a “Post-Game Analysis”. Here is what that looks like:

This process may seem pretty basic, but it is the foundation for change and improvement. I’ve used it many times to help teams overcome what they considered insurmountable obstacles!

I clearly stated from the beginning, you don’t have to set goals to get things done. However, many great leaders and teams have seen amazing results setting goals. I’ve also personally witnessed the power of setting goals when done properly. That’s not to mention how I’ve used goal failure as a stepping stone to later wins. You could even ask yourself…what would have happened to those teams if they hadn’t set those goals? Would they have won anyway or would they have ended up in a lesser position? My guess is the latter.

So, whether you are setting a goal for yourself or for a team, I believe it’s well worth the effort!! Take the time to set goals with purpose, track your progress, and embrace your failures. You will be better for it!