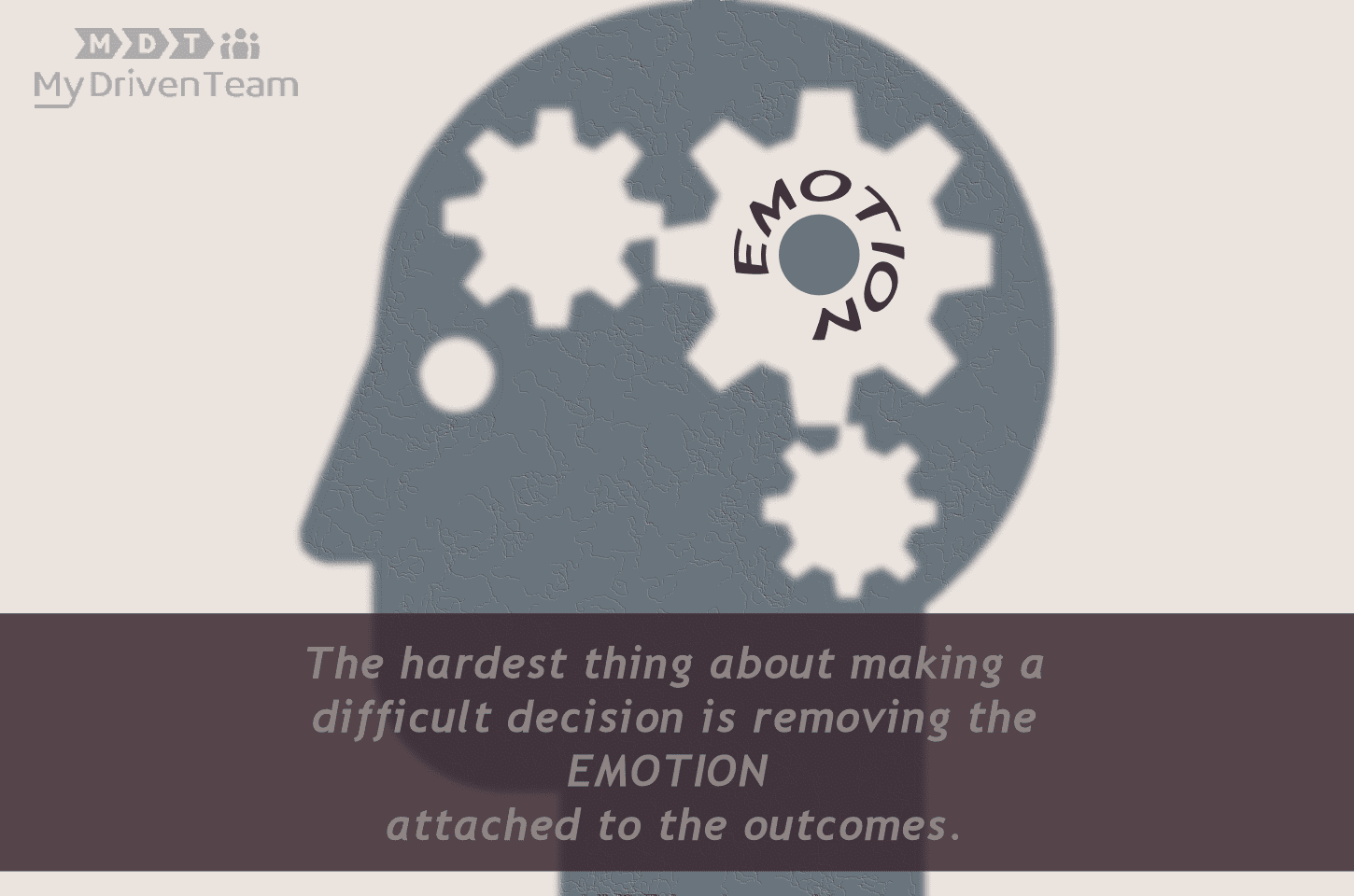 Depending on your particular position, the frequency of difficult decisions could range from annually to daily. That said, a “difficult” decision is relative to the person making it. I’ve seen high level leaders make what I consider a level 10 hurricane with no more than a blink of an eye. Then again, I’ve seen those same leaders get caught up and stuck on a decision that I would categorize as no more than a stiff breeze.

So, what’s the difference between a difficult and an easy decision? It often comes down to emotion. Emotions quickly cloud the weight of different outcomes and make it harder to choose. So, the key here is to find ways to remove or at least limit the impact of your emotions and break down the choices into facts. Once the facts are laid out, the decision becomes more like math.

Removing emotions from decisions is not an easy thing to do. Therefore, like any good problem, there’s a tool for that. Below, I’ll detail how to use this tool to as a power move for working through difficult business or personal decisions and share a few inspirational stories along the way. I’ve used this tool personally during heavy debates with groups of people and in situations that involved my family and finances. No matter what decision you need to make, if it’s keeping you up at night or causing your team heartburn, this can help you defog the window into your future state.

The time tested way to make difficult decisions is to use a simple process that helps you remove emotion, use logic, and make the best choice more obvious for you and your team. The process I’m referring to is called a force field analysis (link to example doc). Think of it as a weighted pros and cons. This process is broken into the following steps:

This is an often under-rated part of the exercise. Often-times we let our personal lens cloud how we see our options. What I mean by this is that we believe there is only one or two options. This immediately adds pressure and stress to the situation. Once again, emotions can easily get in the way and you won’t even realize it!

My advice on options is to ask a non-partisan person for their input. I would typically go to someone that is fairly optimistic in their view point, because they typically see more options than a pessimistic view point. If possible, talk to a few of these types of people to really cultivate your options.

So, now just make a list of those choices. Below, I’m showing an image of three possible choices. Those could just as easily be a list of color choices for the paint in your home. While that’s probably not worth a full analysis, the process would work. At this point, the options are yours to identify. One thing to note is that if you have more than three options, I’d recommend you try and get it down to your top 3. That said, this process can handle more, if needed.

Pro-tip…if you are doing this in a group setting, don’t do it all at once. Do a section and take a break. Do another section and take another break. You want to give your team time to process and everyone has different processing speeds.

I knew a leader once that was facing a forced lay-off. He had to decide which of his 5 Managers to “lay-off”. He had to choose between the young Managers that were up and coming and the more seasoned experienced Managers that were reliable but set in their ways. Ultimately, it was one of the more seasoned Managers that was laid-off. This inspirational part actually came later as this leader ultimately realized he had made the right decision. He knew that by using logic and removing emotion that the Manager chosen was actually holding back the team and adding risk to the business.

Now, I know that earlier I said we want to limit the impact of our emotions. However, we all have emotions and they are part of the decisions we make. So, you have a choice, either let them get in the way of the decision making process or simply make them a part of it.

I say make them a part of it! Simply take a breath and write down the things that are important to you or your team about this decision. What’s stirring your heart and your head? What’s the impact to the business or team? There’s probably some good things and some bad things. Both are important. Just start making your list for now…polish and pretty it up later. Here are some areas to consider:

Following our example from above, here’s another snapshot with the measurement criteria added:

This story is a bit more historical in nature (1519). Hernán Cortés, a Spanish conquistador, had to choose between landing in Mexico to face vicious Aztec warriors or return home and risk execution. After an attempted mutiny by some of his men, Cortés knew he had to do something. Realizing that his men were fearful and unsure of victory, he decided to declare his ships unseaworthy and sunk them all. This gave his men no choice in the matter!! Ultimately, his decision proved to be the right one as they went on to Tenochtitlán to overthrow the Montezuma empire.

Now it’s time to measure each of these against the options you have in front of you. This is actually the toughest part. Deciding on how important each of these things can still be tough. The idea here is to take these as a bunch of little decisions instead of one massive decision. Personally, I like to use a from 1 to 10.

Pro-tip…you’ll see in the image below that one of my criteria is actually a negative (“Personal Financial Cost”). Ultimately, we will add these up, so that particular one is an inverse rating. What I mean is that starting my own business is going to cost me as an upfront investment, so I rated it very low on the 1 to 10 scale. Whereas, staying at my current job is a 9 because it won’t cost me much (other than the pay cut).

Some leaders face the fact that their position is asking them to change, but they are unsure if they are willing to make the change. One leader I know in particular was facing this kind of decision. She either had to change some of her core values or leave the position entirely. Using the force field analysis tool, it became clear that the risk of changing her core values and staying the course was higher than keeping her them and walking towards the unknown. Again, after looking back years later, she told me that this was one of the best decisions she ever made! She now works in a field that allows her to be true to her values, but also continues to stretch her abilities.

This last step is simply adding up the individual measurement categories and coming up with a total. I’ve put all this together in a google sheet so that it sums up for you, but trust me, the back of a napkin works just fine too. ;)

Personally, I always like to highlight the winner and loser in dramatic color for mental clarity, but you get the point I’m sure…

I’m a numbers guy. That means that I like the numbers to speak to me. That being said, I’ve used this many times and had to re-work the numbers a bit. That’s why I’ve added this last step that I call the “sniff test”. Just take a few minutes and walk through the measurements. Do they make sense? Do the smell right?

A great way of doing this is presenting the information to someone else that is unbiased (if you can find someone like that). This really forces you to explain how you measured each option and forces you to defend any of them that you may have fudged due to your own bias.

Now you’ve made your decision, right? If not, what’s stopping you? You’ve got your facts, you’ve used critical thinking to analyze your options, and you’ve weighted those against what’s important to you or your team. I’d say that’s about as much as you can do, aside from procrastinating and praying (which obviously are options too).

I’ll leave you with this…whatever decision you make, not taking a decision is an also a decision. Press forward and lean into the work you’ve done here! Good luck and God bless you on your journey!