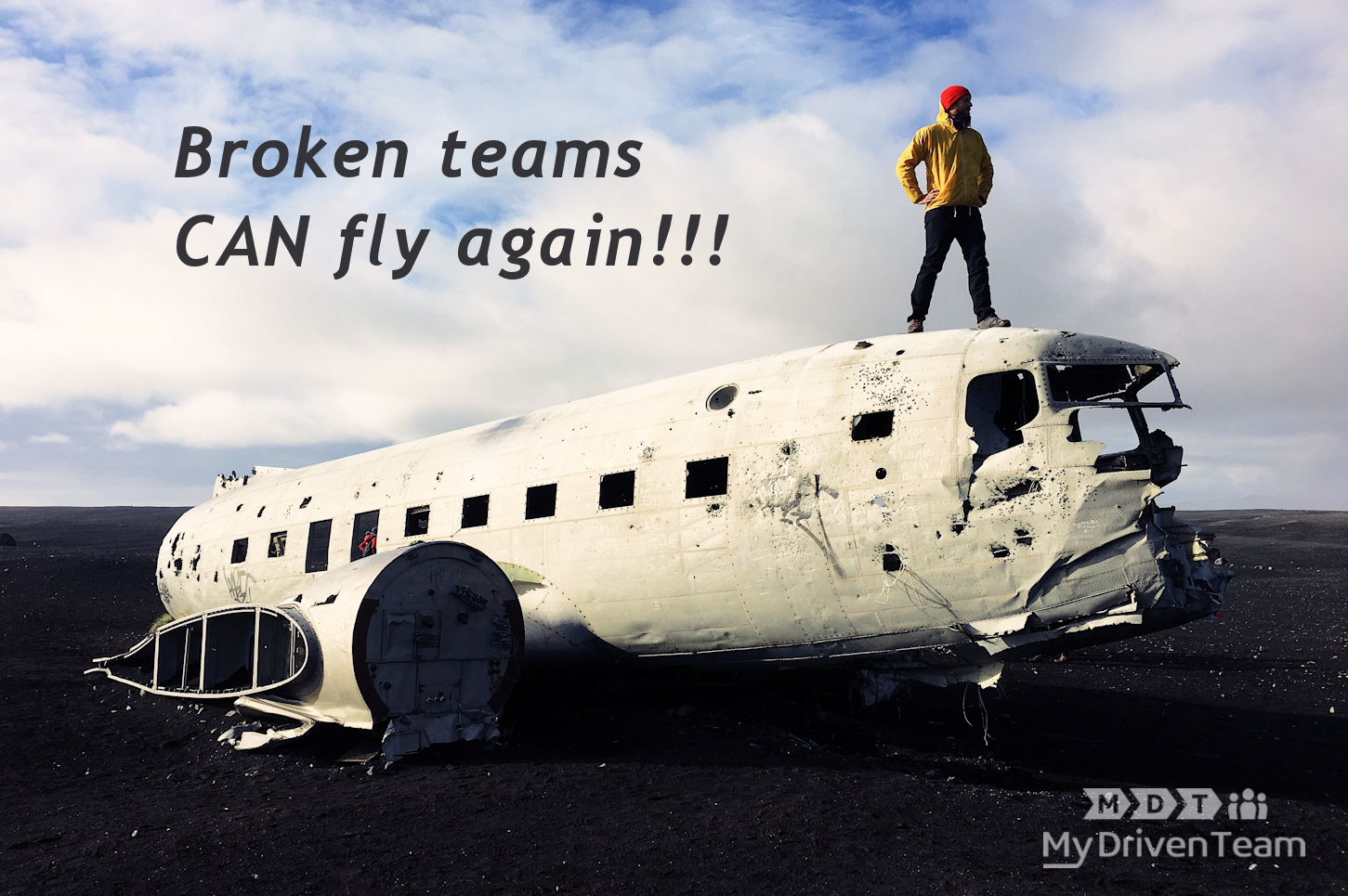 Unfortunately, broken teams are a constant in any organization. Typically, by the time a change agent like me is asked to help, there is already some sort of ailment within the team dynamic. Not only have I had to navigate this type of difficult situation many times, but I’ve also watched numerous professionals do the same. Each of these pros had their own ninja skills, which I’ve studied and done my best to replicate over the years (while honing my own style at the same time).

In my experience, fixing a broken team can be boiled down into a few steps (although these might not be easy, they are effective). At the core is taking the time to help the team find their way by changing the behaviors that got them there – this includes leadership behaviors:

Think of this analogy….a guy walks into a crowded restaurant and screams from the top of his lungs…fire, fire, fire!! This gets everyone’s attention and everyone starts moving (assuming they aren’t too drunk). Finding a common goal, does exactly this. In this example, if there is no fire, this will be a short-lived alignment. However, if you select a real goal that the team can get behind, you have a starting point to get everyone moving.

That said, a common goal can come in two different forms. Either you are trying to fix a problem or you are trying to get to a common destination. And sometimes its a mix of both. Either way, figuring this out is the only way to start. So how do you do this?

Talk to everyone on the team (including the leader and the leader of the leader). What is important to them and to the overall organization? Do they want to make more money? Do they want to survive a tough competitor? Are they looking to build something special? Are they just trying to improve their work-environment and retain people?

This can be tricky, but it’s a non-negotiable! If you can’t find something that everyone can agree on, then this may not be a fixable situation. Typically, I’ve found that the leader or even the leader of the leader can help with this particular item. Even the most difficult team’s usually have some underlying reason for being there.

Now, one caveat is around money. Sometimes people will say something like, “I’m just here for a paycheck”. This is obviously true, assuming we are talking about a work team. However, if that’s the case, you’ll have to drill a bit. Nobody wants to be stuck somewhere making money, but not feeling valued. The real question is typically underneath the money goal. The only way to really make money a common goal is if there is a real potential to make more money for everyone. Otherwise, the common goal should be something more than just dollars.

One team I worked with made the comment about just collecting a paycheck. So, I then asked what they wanted to do and be in the future. Every single person said they want some kind of personal growth. Either they wanted Leadership Experience, more training, or even to be just a better craftsman. So, instead of focusing on the money, it was critical to then align what the individuals wanted with what the organization needed. In this case, it was investing in the people so that they could have a better work experience while making more product in a safer environment.

Two ears, one mouth. Made for you to listen twice as much as you speak.

This is especially true if you are an outsider because people will unload easier. Now, if you are in a leadership position within that team, getting to the truth can be a bit tougher.

Think about going to a restaurant where you experience a less than stellar dinner. When the owner walks by and says, how was you dinner. Most people say, “it was fine”. They don’t come right out and say something. A few may, but most will keep it to themselves and just complain later. The same is true on a team. Most people will not tell their boss when the boss is messing up.

If you had a magic wand and you could fix one thing within your team and or process…what would it be?

If you find yourself stuck and unable to uncover the real truth in what’s ailing your team, I would suggest getting some help. A good HR Manager can do wonders. They can help you with tools like a 360 degree review, which can be enlightening.

Break the problem down to its roots

A tree, as stoic and beautiful as it might be, has a leaves, branches, a trunk, and roots. Of course, trees with deep roots and a strong trunk are hard to break. This is the same as many problems. They seem simple at first, until you dig under the surface and see the many roots. It’s there we get the term “root cause”.

The funny thing about roots is that if you tackle them one at a time, a pair of scissors can cut many of them. Even a small handheld ax can tackle larger ones. However, if you try to tackle the trunk, you need a serious chain saw, chains, and possibly even heavy equipment. Worse than that, it could take years for it to truly die.

So, that’s a a lot of words to describe an analogy…but what does it mean?

Simple…identify the top three primary causes of the problem you are facing. Again, be careful to identify these separately at a time by asking these kind of questions:

Once you’ve made your list and singled out the smaller root branches, it’s time to go just a bit deeper. Just as WHY (max five times). Start with two or three and be ready to pull out the scissors!

Was it a process issue = yes, I forgot to get it serviced per the installers instructions

Why = I don’t have a good way to remember to get this done.

Was it an equipment issue = yes, the motor got jammed up

Why = I didn’t change the filer

Was it a leadership behavior = yes, I’m the leader and I messed up

Why = I didn’t make it a priority

Was it a process control = yes, I didn’t keep track of my filter timing nor my maintenance

Was it a manpower issue = no

Was it an environmental factor = yes, it got really dirty inside

Why = aside from filter change, my basement is really dusty

Ok, so this is a very basic (and made up) example, but hopefully you get the point. By breaking the problem down into it’s parts you get the opportunity to see smaller actions that can impact one or multiple issues.

Be sure to show your work to the team. For even better results, do it with them. The more engaged they are in helping to solve the issue, the more attached they will be to the positive outcome. The best part about doing this exercise with them is that you are teaching them critical thinking and problem solving all at the same time!

Now that you’ve uncovered the problem, it’s roots, and have identified some actions, you might think you’ve got it solved…not so fast! Many have created great plans. Many have started great plans. But only a few have followed through with those plans.

Set yourself up for success by adding accountability to your recipe. The best way I’ve found to do this is by writing down your plan, clarifying who is responsible and when it should be done. Review this plan at an appropriate cadence (I like weekly personally). Communicate all of this to the team so that they will start to trust you and the process. At some point (once the process is established), you can even delegate the action plan ownership.

One important thing to note here around trust and respect. More than likely, whatever problem or problems that have existed have done some damage. There may even be hard feelings and some lingering trust issues.

This is why it’s critical to set expectations around trust and respect for everyone on the team. I’ve written more extensively about this issue here:

Respect In The Workplace – A Guide To Lasting Results

Whatever you do, skip this step at your own risk!!!!

I recently heard someone say:

Never under-estimate the amount of sales and marketing it takes to change the culture on a team.

It’s easy to do a bunch of work and not really get recognized for the amount of effort and energy expended. That would be a shame! Here’s a few things to consider…

Never under-estimate momentum. Change can be very difficult and usually requires energy. Therefore, you need to take advantage of that build-up of energy. Dripping small changes out over long-periods of time may seem easier, but you never get the advantage of the energy build-up. People will think and say, nothing really changes around here. However, if you make the changes quickly and follow through as promised, people will start to see the pattern and look for the next problem to solve.

This isn’t to say you rush things. It’s just important that the team see’s things moving. Stagnation is the enemy!!

Make it big and be proud! Even if things don’t go as planned, you want the team to see that this is important and that they should be proud. A sign with chart with a trend chart is a start. However, it’s best if you can make it speak to the team. What is their personality? What are their interests? Get the creative juices flowing with them.

If this is a big journey then make the size of the sign match the destination.

As I said before, change takes energy. So, you’ll want to take advantage of any energy you can find. Celebrating small victories (and of course big ones) is like taking advantage of a natural renewable resource. Why wouldn’t you?

This could be as simple as a high five with the team up to a nice bonus on your paycheck. My only suggestion would be is to use your team’s creativity on this (and have fun with it)!

Going through this process only once, may or may not produce the results you are looking for. However, if you can do this repeatedly you will almost certainly change your team’s dynamics. Once you build an expectation of improvement based on gap management and problem solving, you have a recipe for excellence. The only unknown ingredient at that point is time.

Good luck and may God Bless you and your Team!!!